In 2015 I traveled to Rome and as any traveler enjoying the city, I visited the Colosseum. I decided to skip the lines by buying a private group walking tour guide to the Colosseum, the forum area, and Palatine Hill. (Recommended)

After we walked into the Colosseum and forum, we walked up to Palatine Hill. From there we entered Flavian Palace, which was the Imperial residential complex of the Roman Emperors. Of course the tour guide kept pointing out artifacts and recalling historical facts about the place. When she pointed at a relic marble floor she said: “Saddam used the same marble in his palaces.” I was surprised she knew that.

Let me be that guide for you in Iraq. And in case you didn’t hear about Saddam, he was kind of a big deal.

Yes. All Saddam’s palaces are in fact covered with marble floors and walls inside.

A few days ago, I gave a private tour of Saddam’s palace to a few friends – the Radwaniyah Palace Complex. The adjective “private” means figuratively and literally in this context. The current palace is not open to the public.

Situated near Baghdad International Airport, the palace is built on a man-made hill. I stopped the car near the foot of the hill; and we all began climbing the wooden stairs made by the American Forces in 2003. After about 200 steps, we finally reached the palace. That is where I pointed out two interesting facts to my friends that I would like to share with you in this post.

First, as we toured the ruins of the palace overlooking Baghdad, I pointed to a pole where the Shi’a black flag of Imam Hussain is flying.

Flying the Shi’a flag on Saddam’s palaces, government buildings, and army installations has become a widespread symbol of Shia coming to power in Iraq. It is the first time the Shi’a sect of Muslims is ruling Iraq.  They are intentionally making it known to the public. As for the Sunnis, they feel taunted and even antagonized by these flags.

Second, and at the top of the palace are Saddam’s initials SH (Saddam Hussein) written in Arabic. The irony of his initials is that it is the same letters used to make the two words: “Became Jackass (صار حمار)” Iraqis are making derisive statements out of those initials. 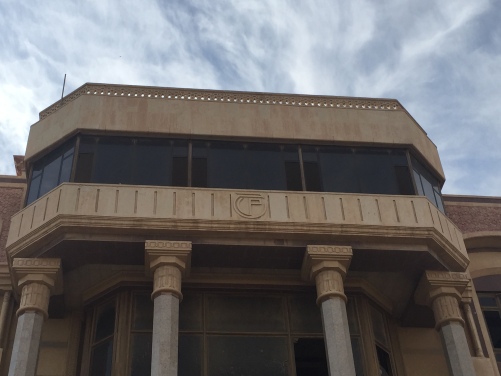 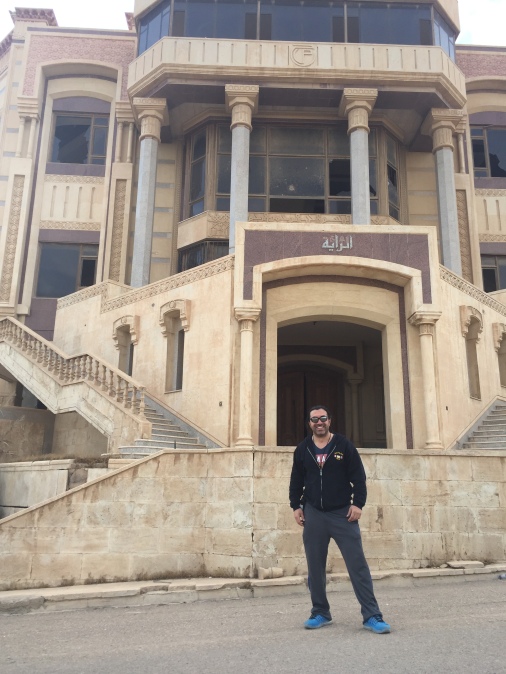 The initials are ubiquitous on all Saddam’s palaces. They are placed on the perimeter walls, inside and outside of the palaces. I’m not sure if it was Saddam’s idea to put his initials everywhere to perpetuate his name, or just a creative sycophant architect.

Currently, it is still not determined what the Iraqi government could do with all these palaces, but one of Saddam’s palaces in Basrah has been converted into a museum.

I hope you enjoyed my private tour and found these two facts to be interesting.

P.S. Did you know I’m Italian? Check my post about Italy: I Am Italian.