I cast my absentee vote for Mr. Trump from Iraq. I posted the picture of it on LinkedIn. The post has been getting some attention with more than 321+ members liking and commenting. It circulated on the LinkedIn News Feed across America, Europe, India, and Australia. 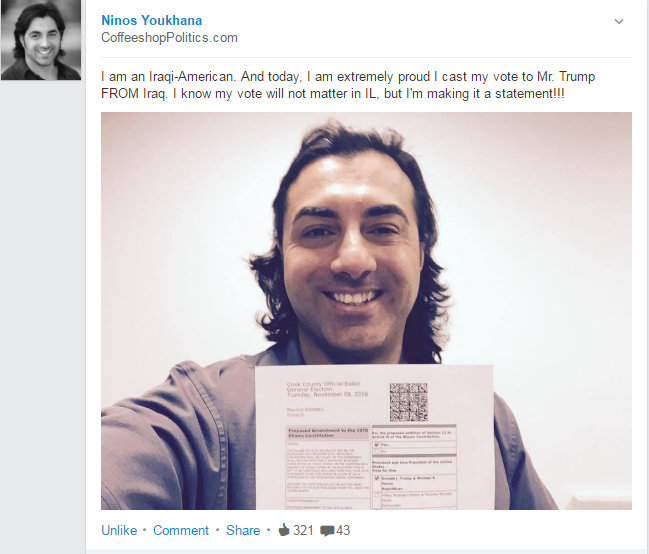 A few members were apoplectic in their private messages, some were acerbic in their comments, some could not believe that Muslims in Iraq like Trump, and someone commented: “So what’s your point?”

I will not write a polemic defense, but my response is simple: Political Prostitution!

So – a person who has been bought by lobbyist, interest groups, and corporations, is no different than a prostitute being paid for sex. This is political prostitution!

A few weeks ago, I posted on Facebook predicting Hillary’s win. For two reasons: she has the Saudi ATM card in one pocket and the US Media in the other. Plus, she can dance the ballet of foreign politics…Very well.

As for why would Muslims in Iraq support Trump, if he is as racist and anti-Muslim as the media portray him to be?

Well, Trump berated Saudi Arabia, and Shia Muslims in Iraq do not like Saudi Arabia. It’s the epicenter for the rise of the Islamic fundamentalism represented in Al-Qaeda and ISIS.  That is why Shia Muslims support Trump. Get it?

Look…I was born in one of the most corrupted nations in the world – Iraq. Corruption is ubiquitous. It’s a way of life. In American, corruption is capitalistically ethical.

As I watch these privileged elite on TV, they remind me of French aristocrats. Financed by giant corporations and supported by corrupted media with their furtive polling. This charade of politically correct platitude speeches with each word balanced between urbanity and inanity are worthless as junk food.

Corporations want to export all the jobs out of America and create a newfangled serfdom under the name “Contractors”, sedating the public with latest marketing tactics, patting on their shoulders with simper while ushered to the guillotine debt. CEOs and executives brainwash the public with “re-invent yourself” in the new market economy. How would my mother “re-invent” herself?

Part of me feels a sense of schadenfreude wishes the corrupted politicians and rapacious CEOs Dante’s nine circle of hell.

At the end of the day, I am thankful for all those who liked my post. And for members like Benjamin Chazen who sent me the following private message:

“I saw your post about your vote for Trump and It struck me in a positive way! I even shared it on my Facebook page. I think it’s fantastic that an Iraqi American like yourself not only would vote for Trump, but (would) show the world as well! I think there are many people who simply aren’t letting people know their true feelings about this election and I’m glad you feel the way you do!”

And for Josh Snead who said: “I’m encouraged by your desire to vote!! You are a great American!!”

Casting my absentee vote – from my birthplace – for an American presidential election, made it a historical moment. Yours should be as well.